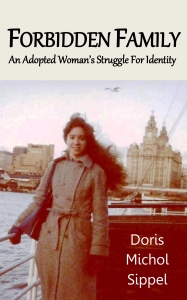 Raised from infancy as an only child, 18 year old Joan Mary Wheeler knows only that she was adopted. In her senior year of high school, she is found by siblings she never knew she had. They tell her that she is the youngest of five children born to married parents, that their mother died when she was three-months-old, and that her name was Doris Michol Sippel.

What happens next is the unraveling of family secrets and betrayal, joy, sadness, and the push-and-pull of two families on the one person they share. This reunion stretches across the North American continent, the Atlantic Ocean, and spans four decades.

This is the story of one woman who wants to know why New York State changed her identity.

~~ ~~ ~~ ~~ ~~
No real names of living people are used in this book, except: my own, public figures, and two used by permission. Real names of all of my parents are used because they are deceased. The law states: dead people cannot sue and neither can their heirs.
~~ ~~ ~~ ~~ ~~