This Page consists of a re-print of a blog post on these articles:

Today’s post will be a look back at my very earliest Letters to the Editor and very first newspaper interview, both taking place in late 1975 when I was a college student and only 19 years old.

The newspaper interview came first. It came about because I had started a local chapter of ALMA – Adoptees Liberty Movement Association – just a few months earlier. I got the idea from the New York City headquarters, from which I had been receiving newsletters for nearly a year. Oddly, I had heard about ALMA, not from other adoptees, but from adoptive parents in a local chapter of the national organization Council on Adoptable Children. How that came about was purely by accident. The previous year, in September of 1974, six months after I was found by siblings I never knew existed, I moved 100 miles away from home, lived in a college dorm, and made friends with professors. A professor and his wife were adoptive parents who asked me to meet with other adoptive parents. I did. One of the adoptive mothers handed me a copy of Florence Fisher’s memoir The Search For Anna Fisher. I read that book in one night. I called Florence Fisher, joined ALMA, and road a Greyhound Bus on two round-trips to New York City were I attended ALMA meetings. That is how I began my attendance and activism into the adoption reform movement.

In actuality, my awareness of the need for change happened the evening I was found by a sister I never knew: March 5, 1974. At age 18, a high school senior with final exams looming and graduation around the corner, I was thrust into emotional trauma of being an adoptee who did not search but was found. With a swirl of raging mixed emotions, I met my natural family, and was angry at my adoptive parents for keeping this secret from me. They knew, but intentionally kept me away from siblings I could have easily had in my life. Less than two weeks after the initial phone call reuniting me with my siblings and our father, I watched the television movie Stranger Who Looks Like Me, staring Beau Bridges and Meredeth Baxter Bernie. Those two actors portrayed adoptees in search for their natural parents. I became aware that there were other people, much like myself, attending support groups and actively searching and being in reunions. That was the real beginning of adoption reform awareness for me.

Much of this is revealed in my book, Forbidden Family.

My early life trauma due to many mishandlings in my adoption caused me to think about what it means to be adopted. I soon made my experiences public because I believed then, as I do now, that no adoptee should  ever have to face the sheer terror I faced at an early age. My very life course had been disrupted several times by adoption by the time I had turned 19.

Here I present my very earliest news media interview. I chose to use the name of “Sarah” instead of my real names for this interview:

My next projects were Letters to the Editor of the Erie Morning News. I hesitate to publicize my earliest writings because of the juvenile nature, but these are the beginnings of the only way I knew how to react to the trauma of my adoption. These are the writings of a 19 year old college student. 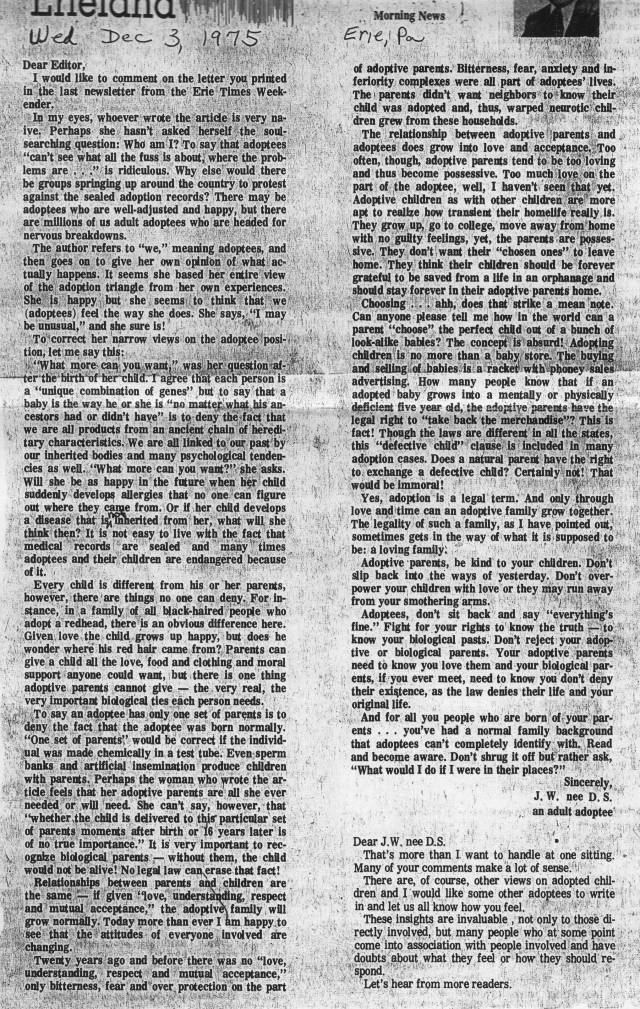 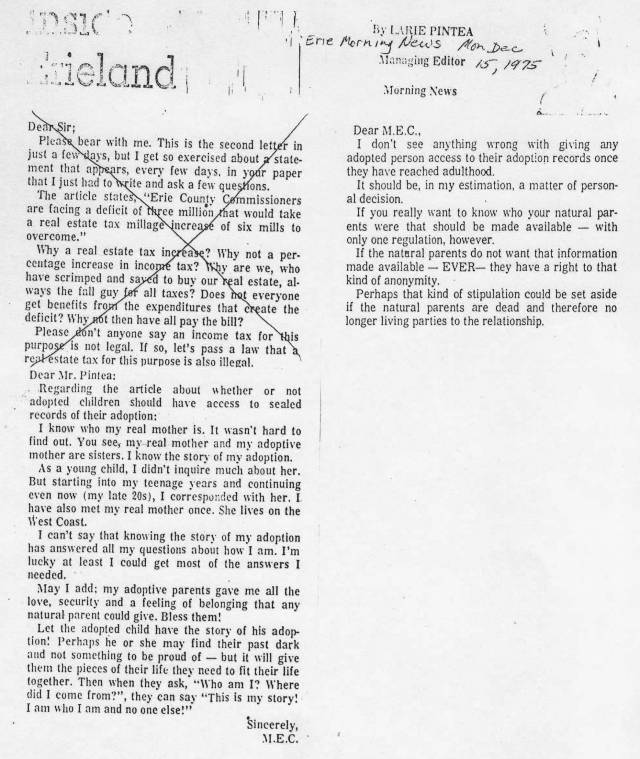 The Editor asked for input from other readers. There was only one response: 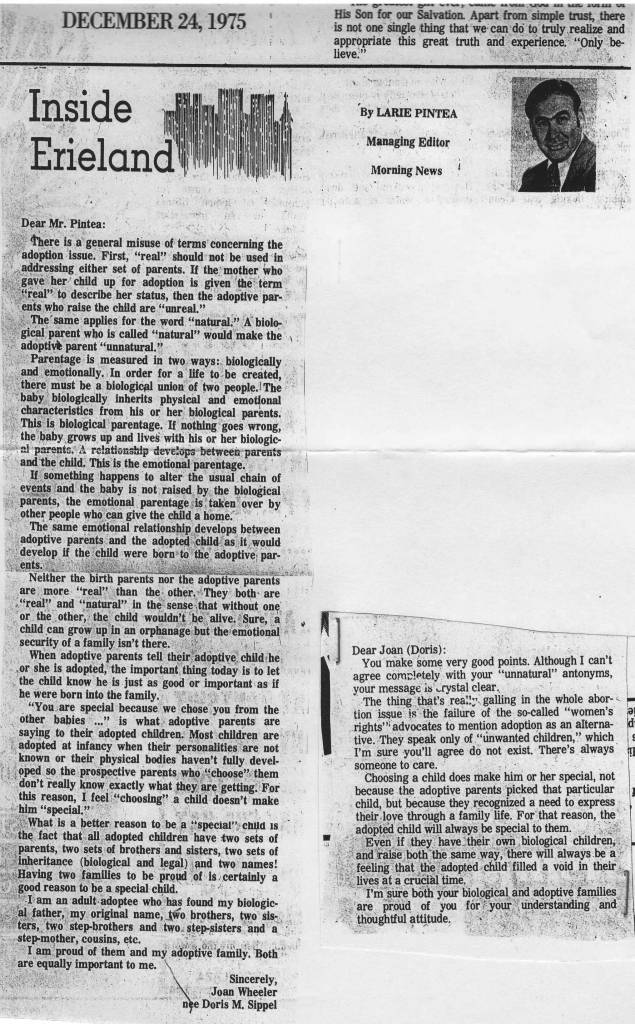 After all of these years, I hoped the movement’s goals would be further along than where we are today. Adoptees were joined by natural parents in the 1970s for the joint effort to change the negative effects and policies of adoption. But adoptive parents and their lawyers and adoption agencies are fighting back since the 1980s with the NCFA – National Council For Adoption and the Catholic Church. There is a huge belief that adoption and birth records of adoptees must remain sealed.

I have been fighting for the right to legally obtain my birth records since being found in 1974 after my birth identity was so shockingly revealed to me. Though I have my birth certificates and my adoption papers (my adoptive mother through them at me in a fit of rage when I was 18), I want the legal right to possess them.

I am but one person in the larger body of adoptees who want the same rights as non-adoptees: our birthrights and our civil rights.